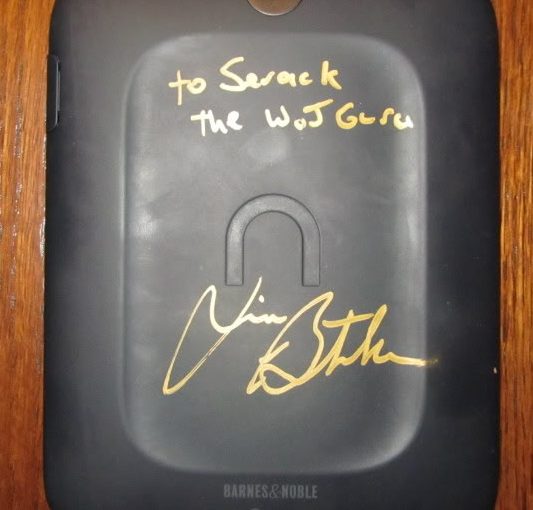 Serack “The Word of Jim Guru” here.  As a start to the genesis to the new official Word of Jim (WoJ) resource, I’ll spend some time explaining how this resource came to be.

A co-worker and friend got me into the Dresden Files back in late 2009 or early 2010.  I joined the official forums back then and got caught up in theory discussions (read arguments) that I felt would have benefited from some kind of reference collection of the WoJ stuff out there.

I started by vastly expanding on a collection of links to WoJ sources created by forum member “Tiracakes.” I cast my net far and wide finding videos, written interviews, Amazon book review comments, and of course the posts Jim had made on his official forum.

Next, I started collecting individual snippits of information and organizing them according to subject to create what became my “WoJ Compilation.”  This was a lot of effort because it not only entailed finding and organizing them, but for many of them I had to transcribe them into written format as well.

My efforts lead to being appointed a semi-official curator of the WoJ section of the Forums, and eventually Jim’s team invited me to be a Beta Reader for him, where I have been serving since the Cold Days and Aeronaut’s Windlass beta reads.

Now, with the official Jim Butcher Forums in their twilight, Fred asked me if I would help transfer the WoJ material to this new format, and I agreed, and committed to try to keep it populated with new material as it is generated and found.  Although I might have dragged my feet a little at starting the project.

As quoting WoJ is my thing, I’ll conclude this post with a 2009 Bitten by Books WoJ explaining how Jim’s official forum/website came to be:

“What I want to know is, how did you meet the goddess Priscellie and Fred/Iago and others? And thank her again for doing the butcher block pod casts.”

Fred and I played a text-based internet RPG together called AmberMUSH, back in the early 90s when the internet was just beginning to hit. We did not get along well.

I was at odds with a friend of Fred’s, and Fred is the kind of guy who is fiercely loyal to his friends. We eventually worked things out, and when he came to grad school in the same general part of the country, he joined up with my semi-regular D&D or Warhammer games which I ran out of my teeny tiny little 20×20 rental house in Norman, Oklahoma. As I kept trying to write and get published, Fred gave me his unwavering support and plenty of encouragement, for which I have probably never adequately expressed my gratitude. Part of that was him volunteering to set up a basic bulletin-board style forum for fans of the books–which he did long before the books even SOLD, much less got published.

I thought he was insane. Enthusiastically and supportability insane, but INSANE.

Turns out he was just a lot more farsighted than me, I guess.

Priscilla hopped onto the forum at some point several years ago, and through her unflagging enthusiasm, willingness to volunteer her time, and general all-around niftiness became kinda indispensable. Several other folks have made similar, enormous contributions in terms of time they’ve given to the site, including Mickey Finn and ashton, and probably more people whom I am not remembering but should be.

I didn’t go out looking for any of them. I didn’t put out an ad in a paper asking for their help. These people have just /given/ it. Like Fred, they’re kind of insane, grotesquely supportive, and very, very encouraging to me in both a professional and personal sense. I’m grateful to them. I don’t quite understand why they do what they do, but I’m willing to take it on faith. I doubt I’d be where I am today without their participation.

Jim Butcher has made an analogy of his relationship between himself and his fans saying he’s the artist and we are his patrons, and as such he tries to take care of his fans (when he’s not laughing maniacally over leaving us with a “cliffhanger”).  He is a really nice guy, and over the years he has interacted with us a lot.

And so we have this site, where we do our best to archive all those lovely answers, juicy tidbits, and words of advice he’s given to us across the years. Here you’ll find elements of backstory that don’t always make it into the novels, but which still inform the world, and all of it taken directly from Jim himself.